So games 5 and 6 today. Which will both see me make a fuck load of mistakes!

Game 5 was 5 objectives and Spearhead deployment.

There are no pics as my opponent Alan didn't want any, which I was glad for as my batteries where dying, and this was the most tactically taxing game of the entire tournament!


Mistake 1:
I won the roll for deploying the objectives first and in a bout of madness tried to group some of them up to negate the BA's innate mobility and I thought it was Dawn of War, not table quaters - Do'h!!!

So naturally I lost the roll to choose deployment zone and Alan took the top left one: 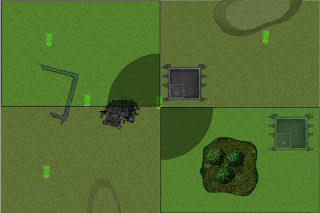 So we set up, Alan kept his Melta Tactical Squad in reserve and I kept a Single Land Speeder and my Scouts in reserve. The Libby, honour guard and the dread where all riding in the Stormraven.

I saw this game as - "If I kill the Land Raider and the Stromraven - I win" which is true, but hard to do.

The game started of well but I just could not kill the Land Raider despite all the melta fire I was pouring on to it. I manage to block it in the middle with a rhino but just could not bust it open. I manage to get my scouts in on turn 2. One in form the left to pop the rhino and criple the combat squad inside, and the other rear shotted the Stormraven.

Meanwhile the Libby and the Honour guard jumped from scout squad to scout squad putting out fires and then into a massive combat by the middle 2 objectives. His tactical squad in reserve came in on to the far right objective and took out the Razorback over there but not before grouping up in sight of the Long Fangs and losing 8 Marines to 4 frag missiles! But the 2 remaining marines ran back into their Rhino and camped the objective.

In the end he had two tactical marines on the top left and top right objectives and all I had was the bottom left - until I went for a massive gamble on trying to get a draw, but it failed.

My mistake in putting down the objectives cost me, despite it being a tactically brilliant game to play in. It was proper cut and thrust, with move and counter move, good luck and bad in equal measures for both players. Best game of the weekend for me.

Anyway game 6 vs Orks in Dawn of War, Annihilation

Game 6 saw me on the same table as game 4, but this time against Gareth Donnelly's Orks.

Gareth's Orks where:
Big Mek with Kustom Force Field
3x 15 Lootas :o
3x 12 Slugga Boyz, with a Nob armed with a Klaw and a boss pole. In a Trukk with a red paint job, grot riggers and a reinforced ram.
18 Slugga Boyz with another klaw and boss pole nob in a.......
Battlewagon, Deff Rolla, Red paint job, armour plates and grott riggers
3 Deffkoptas, all with Buzzsaws.

Now I will admit now I saw the Lootas and just panicked like a noob.

So here's how we both moved on at the end of turn 1:
I brought everything in - even my scouts. The plan being they hijack the Long Fang's Razorbacks

Turn 2 sees 2 land speeders crash and burn from the lootas while a push up the left pretty much unmolested. A unit of Long Fangs pull of a miracle shot on the Trukk next to the Battle Wagon and destroy it.

Turn 3 sees me push up some more and the Deff Koptas come in and mess up a unit of long fangs. I bring back a unit of scouts to deal with them, but it takes 2 rounds of combat to kill them - even though they should of made the scouts mince meat.

Meanwhile I push the last Land Speeder in front of the Lootas daring them to shoot it and not my Rhinos.

Now at the start of turn 4 my batteries died so my last pic of the Battle Wagon breaking to the middle of the board in hoping for a multiple ram with it's deff rolla:


The Battle Wagon does indeed ram one Rhino and destroy it and the unit inside try to death or glory with the Wolf guard with a combi melta but roll 11 for their leadership and run! The rest of the game turns into the Orks throwing chaff infront of the Wolves so they cannot close the kill point gap, granted this does net me the large mob of orks, the Battle Wagon and the Big Mek but it's all too late in the day.

To be honest between panic, a dodgy stomach, and the disappointment of losing the Blood Angel game to my own stupidity - I freaked out like a noob.

I would like to think I am man enough to admit to my own mistakes.

So what have I learned over the weekend about me and the list:

Aggression pays off.
I need to put the pressure on from the word go - surprisingly I won both the "roll dice and draw" games by being the more aggressive and tactical player. I lost both the kill point games by playing like a sissy. My own natural fear of Orks lost me game 6 - I should of deep striked the land speeders and outflanked the scouts as normal, but T4, 2 attack orks in a unit of 15 seemed too much for my scouts. I was so hung up on the Lootas I forgot about the soft targets, the easy kill points - the trukks.

Having no Death Star messes up my opponents.
In a game where everything is an equal threat what do you choose to kill first? If I had a unit of Thunderwolves it would be obvious they would be target one for my foe.

The list needs fine tuning.
I am close to a great list, with a few tweaks here and there it can really grow it's claws and teeth to be a truly fearsome beast.

So come the Weekend (Sunday hopfully) I will be doing a post on what did and didn't work in the tournament as well as in all the practise games I have had since January in the run up.

So come back Sunday where I will cut thought each unit piece by piece CSI style!
Posted by MC Tic Tac at 14:34