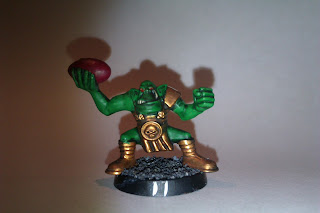 I ain't dead, very much the opposite - having a life and earning a crust has been the main reasons why I haven't posted in a long time!

In that time I did ok at Blog Wars 4 with old Deathwing and a blob of IG, did quite poorly at Caledonian Uprising - but you will be able to hear me bore you to death as I challenged a certain Mr Symcox for game 1 and spoke to him about my list and mech IG in 6th ed, which should be on the next episode of 40kUK as of the 28th of this month

As for the here and now, I'm looking at Deathwing for the foreseeable future It's small and easy to play and transport. Also I have been playing a butt load of Blood Bowl of late as it's a fantastic game and easy on the pocket - especially when you have a crappy job, a mortgage, and a lovely Mrs to put through University!

For the future of blogging I would like to go though what I think of the IG codex for 6th and my various Blood Bowl exploits (and mainly losses) with my old Chaos team the "Merciless Marauders" and my new Orc comedy based of rappers - "Da So Solid Krewe" dressed in teams colours of Bling!