So I wrote a list with models that I have (bar 2) and this is what I used yesterday:

In my first game I played my friend Liam's Eldar. He had:

Eldrad and Seer Council in a Wave Serpent with TL Shuirkan Cannons and hull mounted cannon too.
A Farseer with Guide
2 War Walkers with 2 Missile Launchers each.
11 Storm Guardians, 2 Fusion Guns, Warlock with Enhance and a Wave Serpeant as above.
Guardian Defenders, Bright Lance, Warlock with Conceal.
7/8 Striking Scorpions with Exarch with twin chain sabres.
2 Vibro Cannons

Game was Capture and Control (1 objective each) with Spearhead deployment (Table Quaters).

Liam reserved his whole army so the first 2 turns nothing really happened. His army turned up on turn 3 (nasty). Short of the story was that Liam hasn't played in a while and was in a "6 turn game" mind set so didn't have my objective contested and just wasn't close enough to hold his, so when he rolled for turn the game ended in 5 and he lost.

So a bit of a hollow victory to be honest but if there was to be another turn he would of lost the last of his scoring units more than likely, and I might have his objective while mine is contested (dice permitting).

2nd Game was against my friend Ben's Imperial Guard. I'm a BIG guard player myself so I know his bag of tricks and what's to come. He had:

All my melta guns did jack shit (3 missed, and one rolled snake eyes for penetration). But Living Lightning 3 times over and the Land Speeder Typhoons missiles did a lot of damage. Ben squeezed out a 7-5 win by getting his last 2 KP in the last turn.

So what have I leanred?

Well vs the Eldar, Rune priests are so damm good. I didn't get many powers off due the Runes of Warding, but when I did stuff died. But on the upside 4+ to stop psychic powers reduced Eldrad's effectiveness massively - he only got off 2 out of 8 attempted powers.

Wolf Banners and Mark of the Wulfen ruin most people's days. In a combat vs the Striking Scorpions the banner reduced my casualties by 50% and when the Wulfen rolls a 1 for his number of attacks *bang* re-roll that, oh look its a good roll (4). And vs Toughness 3 my 5 Marines where wounding on a 3+ re-rolling 1's!

Vs the Imperial Guard:
I need to mech up everyone, or they are going to sit still and do nothing and probably die - even if I'm going to camp on a objective all game.
Again Living Lightning kicks ass, but I could do with some Choosers of the Slain to beef up the Rune Priests roll's to hit as I did roll a lot of 2's.
Take a page for the Guard book, send 2 units to do 1 units job. I sent my melta units in piece meal and they paid the price.
If I'm going to take wolf scouts then I should take 2 units (or 3) or none at all. As in both games the unit rolled poorly for their out flank and either died vs the Eldar or did nothing vs the IG. - Again goes back to 2 units doing 1 units job.

So after some note taking and some tinkering around this is the list I want to try next but I lack the extra 2 Rhinos, a melta gun or 2 and 2 missile launchers, and a Land Speeder:

I feel its better, I've basically dropped a few men and power weapons for transports, scouts, and wolf guard.

On the painting side of things I've 'dipped' 90% of the models now in the Army painter strong tone varnish and they look pretty nice even in a half arsed state. So I just to renovate 2 Land Speeders, buy a 3rd, 2 Rhinos, and some melta guns and I'm good.
Posted by MC Tic Tac at 15:49 8 comments:

Well Painting is under way for my Space Wolves (well the infantry) and as I have said else where I'm taking my idea of painting my guys up from Rupert at 3++ but naturally I've changed the colours in my steps:

You then need to wait overnight for the toner to dry!

6) Line highlight power armour.
7) Line highlight a mid shade of Chaos Black and Codex Grey onto the black power armour/weapon parts.
8) Line highlight the previous step with Codex Grey.
9) Line highlight Mithril Silver onto metal parts.
10) Line Highlight Gold onto any gold parts.
At this stage the majority of the model is done, it's just details to go!
11) Paint all the furs Chaos Black.
12) Wet brush Grey/Brown onto the furs.
13) Dry brush 50:50 Grey/Brown, Skull white onto the furs focussing distally from attachments.
14) Paint small parts of skull white onto the most prominent parts of the furs for definition.
15) Paint the eyes and some of the gems with Red Gore.
16) Highlight the eyes with a dot of Skull white.
17) Paint some of the gems Blue.
18) Paint some of the gems Green.
19) Paint bones areas with Bleached bone leaving the dark tone in recesses as a shade.
20) Highlight these bone areas with Skull white.
21) Paint power weapons.
22) Line in progressive layers of base colour plus ever increasing amounts of Skull white.
23) Paint flesh areas with Dwarf Flesh.
24) Paint the base Chaos Black.
25) Base model

And with that you are done!

Seems like a lot to get through but after stage 5 it's mainly just highlights or detail work.

Email ThisBlogThis!Share to TwitterShare to FacebookShare to Pinterest
Labels: Painting 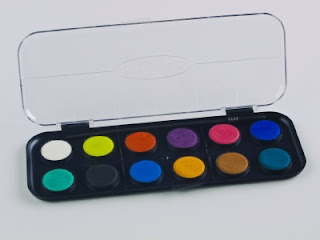 Painting my Space Wolves that is.

I have till March and the first Independent UK Grand Tournament for 40k.

My source of inspiration is Rupert's Collecting an army in one month articles over at 3++ is the new black.


When broken down into 30 simple steps (colours changed for my army of course) it seems like a simple walk in the park, even for a painter as erratic as me. As I have tended to need to be in the "right mood" to paint but this helps me come out of that mood and feel good about painting in general as I'm far from a natural artist.

Someone somewhere (40kforums or Beasts of War I think) asked for my review of Mantic's King's of War game system. I have the Beta and an updated Beta from their open day and I will try to get round to it between painting, Halo Reach, starting a new job and a friends wedding.

Email ThisBlogThis!Share to TwitterShare to FacebookShare to Pinterest
Labels: Painting

So some of you may of heard of a small company called Mantic Games based in Nottingham, UK.

Well today was their open day as well as their 1st Birthday so today I popped along to have a peek at what they had to offer and get a feel for the company.

I woke at 8am but laid in till 9am. Just before I went out the weather man on the TV promised the weather would be good for a Barbecue and Bikinis - it's the UK in October it should be Autumn!

So after a 30 minute bus ride in to Nottingham and a 10 minute walk to their address I bumped into a group of gamers from Germany who where looking for the Mantic office too, but after a bit of roaming we did and went on in.

When we got in there we were given a goody bag with 2 sprue's in it. One with 2 Dwarfs (A Champion and a Standard bearer) and a pair of boots with bone legs, and the second with 10 Elven Archers (including a champion and standard), a dead Elf and a small cat. The Army Painter plastic glue, a Kings of War hobby guide/poster and a Mantic reward card for future orders. Overall bloody generous!

Imagine what a unit of 10 Elves and a pot of plastic glue would cost at GW or anywhere else for that matter!


They had 2 demo games running of their new Kings of War game (Dwarfs vs Elves and Dwarfs vs Undead). Alessio Cavatore the game's designer was running the Undead game so I watched that and listened in for quite a while.

The game seems to play fairly quickly and like a "best of" Warhammer and War of the Ring - seemingly simple but deceptively tactical. I personally don't know the full rules but it seem quite easy to pick up (speaking as a gamer) and I love the Dwarf Berserker lord, in all 3 games I saw he normally took out a unit or 2 solo like a pint sized Chuck Norris.

There was also some painting demonstrations/lessons by the Mantic team as well as a sculpting demo. One special offer was buy a £40/£50 army set and get your own unique sculpted model that you could request on the day!


They also had a collection of models on display as well as their 3-ups that where painted too!

Sadly the weatherman lied and there was no Barbecue or Bikinis, but there was cake and gaming!


You can see all the pictures I have taken in this photobucket album, but here's a few for you to see now:

Email ThisBlogThis!Share to TwitterShare to FacebookShare to Pinterest
Labels: Mantic

Well I'm MC Tic Tac (or John in real life) and here's a bit about me:

I have been playing 40k for over half my life (I'm 25) and Fantasy for about 8 years. I started out with 2nd Edtion 40k and 2nd Edtion Space Hulk. I went to my first GT at the age of 15, and have generally managed in or around the top third with my IG (before they where cool) and I am a founding memeber of Da Wot Notts club. I also do LARP too as well as play Magic The Gathering for fun. I live in Nottingham UK home of GW, Warlord, and Mantic Games

Armies: Ultramarines 1st Company, Imperial Guard, Space Wolves (currently being converted from my old SM). Orcs and Goblins for Fantasy. Chaos and Humans for Blood Bowl, and a Orlock Gang for Necromunda.

I've started this blog up to help monitor my progress for my Space Wolf army for the all new Independant UK Grand Tournament next year at Maelstrom Games Eye of the Storm venue on the 26th and 27th March 2011. As well as likely anything I wish to comment on in relation to gaming.