The Paladins of Steel: Background for a new chapter

The Paladins of Steel are the only Iron Hands successor chapter who carry on their parent chapter's trait of using bionics extensively (unlike the Red Talons, Brazen Claws, and Sons of Medusa). But they turn their views to their minds and souls too, so unlike the Iron Hands they have Chaplains too. Along with a wealth of bionic upgrades and replacements the Paladins of Steel also use small microchips in the brains of some of their battle brothers, mainly in those who have had their brains to waiver with age, gone made or simply have been partially brain damaged. Sadly the microchips have a high burnout rate as mankind lacks the knowledge for such sophisticated technology.

In addition to their extensive use of bionics, the Paladins of Steel also live long lives (by Astartes standards), nearly as long as the Blood Angels, but sadly many older battle brothers go mad with age, why this is unknown and the chapter's Apothecary's and Chaplains are ferociously looking for a cure. For the time being the use of microchips to try and correct the Battle Brothers behaviour and lessen their senses, but eventually these fail burn out most of the time and all that is left is a crazed Marine who is extremely irrational and is reduced to the level of a instinctual predator. But they are extremely resistant due to their microchips and bionic upgrades regardless of their original mental affliction. Once reduced to this stage the rate of mental decomposition is extremely rapid in many Battle Brothers and many end up either brain dead or totally insane. Over the time the Chapter has learned that extreme coolness can slow the process of brain and microchip burn out, so such deranged Battle Brothers who survive a battle are kept in cryo stasis in between battles till needed.

The deranged battle brothers are rounded up by the Chapters Chaplains and Apothecary's into units commonly known as "Predator Units." Severely effected battle brothers sometimes end up as laughing men who sound like they are speaking, laughing, and roaring in machine code. All effort is made to keep such Predator units away from members of the Ministoium (who think they are possessed) or Adeptus Mechanicus (who want to tinker with them). Such efforts make the Paladins of Steel seem secretive with something to hide - despite having their gene-seed cleared many times by the Inquisition and the High Lords of Terra.

The Paladins of Steel have a very large number of Dreadnoughts in their Chapter along with a wide array of weaponry tp choose from. Even the Techmarines have also came up with many modifications to the power fists, chains fists and combat weapons used by the chapter's Ironclads including variations of Lightning claws, Thunder Hammers and even force weapons for Librarians. It is not uncommon for a Company, even the Chapter it self to be lead by a Dreadnought. But sadly like their more biological Battle Brothers some Dreadnoughts can go mad with old age too. If this happens the luckless Dreadnought is given a pair of power fists or claws and pointed towards the enemy. 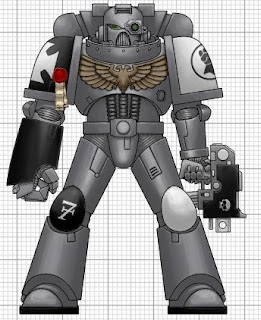