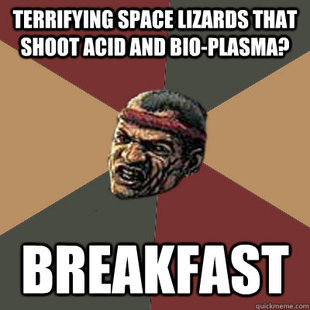 As mentioned in my GT post I have a "new" style Imperial Guard army in the works as a sort of concept. As it stands now this is what I will take to open war:

A Few things to point out. The special weapons squad will more than likely hijack a chimera and make a bee line for the biggest nastiest unit the enemy has (people forget the demo charge is AP2), or hold back as part of a massive flamer base counter attack or advance.

The big odd ball is the Eradicator with the Demolisher. The Demolisher is the big old Ap2 St10 pie plate we love and the Eradicator is St6, Ap4, Pie plate that ignores cover. Why such a odd couple? Well the vast majority of armies will only be scared of one or the other if not both. Anything without power armour will hate the Eradicator while the Demolisher can pick on those 2+ save units. The Eradicator is great at clearing out those deck chair units who only job is to score as most will be crappy units with 5+/4+ armour saves such as Scouts, Grots or Eldar Warriors of some type that the Hellhounds can't get to or are busy with something else. So why mix them? Well I can abuse the squadron mechanics by putting any damage on to the less needed tank, and it's another AV14 hull to hide behind. Also I can hide the not so useful tank in cover to give the useful tank out in the open a cover save if needed.

The Leman Russ Exterminators are pretty much AV 14 Hydras, but unlike Hydras they are no where near as vulnerable and are a lot more mobile, but their 4 shots come from 1 gun unlike the Hydras 2 so a weapon destroyed result can be quite bad but should be less likely.

On the attack/move I can hide most of my army behind cover and the AV14 hulls and advance. Once the enemy is in range or have themselves advanced to try and melta the Russ's they are in strike range of multiple flamers, meltas and plasma weapons. It's not full proof but as things stand at the moment it's a drastic change of pace and tactics for the Imperial Guard.

One thing I can see giving me serious problems is Necron Lords in their Douche Canoes Command Barges doing fly by attacks, but I think smart deployment and movement should make this suicidal at best.

Like I said in my last post in these last few months of 5th Edition I think it's time to really mix things up and go against the established grain, and have some fun doing it!