The Mission was Capture and Control (bore draw), pitch battle.

Ben's list was:
Ork Warboss, with Meganobs in a trukk,
Old Zogwart in a mob of 30 boyz
3 Mobs of Orks in Trukks
2 Sourchas
3 Buggies
15/20 Grots
3 Killa Kans with rocket launcher

I won the roll for deployment and set up first: 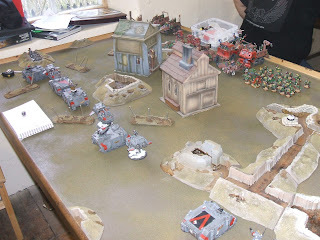 My objective was in the bottom right corner below the large trench system, Ben's was up in a small trench behind the big grey building.

Turn 1 saw Ben steal the initiative and come straight for me down the middle between the 2 buildings and down the right flank.

In my turn I used my 2 land speeders in the middle and a Rhino. My shooting was devastating, I took out the Socrchas on the far right and immobilised a trukk, and killed 2 of the 3 buggies in between the 2 buildings and another trukk as well.

Turn 2 saw saw the Trukk boys on the right disembark from their immobilised trukk and charge the Long fangs who took out 5 orks before they could even swing! Ben kept pushing Zogwart and the 30 boys towards my objective.

In my 2nd turn I got my Rune Priest with Jaws out to make Zogwart disappear down a hole - so no lot's of Wagghhhhhhhs! for him. I push a Rhino down the left flank to threaten his objective. Meanwhile a unit of scouts come in, fluff thier melta shots and have to take out the Warboss's Trukk with grenades. The 2nd unit of Trukk boys on the right lose some to thier Truk being destroyed and some random storm bolter shots and flee. My Land Speeders take out his remaining mobile transports. Combat sees my Long Fangs on the left finished off by the Trukk boys, but the Orks have paid a heavy price for their assault.

Turn 3 sees the Warboss and the Meganobs destroy the scouts who had the nerve to trash their ride, the Killa Kans try to open up the Rhino near them but kept rolling 2's to penetrate Av11. The Big mob of Boys give the Jaws Priest a krak missile to the face in revenge for Zogwart, but it was a price worth paying IMO. I tank shock on to the objective but the Grots hold. The Land Speeders kill two Meganobs with the Mulit meltas,

Turn 4 sees my 2nd unit of scouts turn up who between them and the Rhino squad now sitting on the Ork objective melt 2 kill kans. The Grots hold from the tank shot of the Rhino. My Long Fangs way over on the right flank start 2 turns worth of Frag Missiles at the really big unit of Orks.

I push a 2nd Rhino full of Grey Hunters up the left flank.


Turn 5 sees my Scouts kill the last Kan in combat and the big unit of Orks on the right are held in the trenches by a 10 man unit of Grey Hunters and a Rune priest but pass their double 1,1 leadership test despite losing 13 Orks in combat!


Turn 6 sees the Warboss kill of my last unit of scouts but not before they kill him too. With no Grots left to herd the runt Herder legs it off the board and I hold the Orc objective. I pile my Long Fangs into the combat with the (formerly) large unit of Boys


Game 3 will see my Wolves against Nids in Annihilation, Spearhead. The Nid's will be controlled by Tim King - Captain of the Scottish ETC team.

This will be one mad game and should not be missed tomorrow! (All being well).
Posted by MC Tic Tac at 00:20