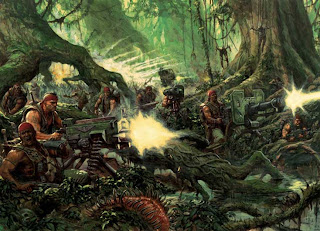 So after a solid win vs Battlewagon Orks in game one I moved on to game two against another Imperial Guard Army.

I was expecting Leafblower as I looked over and saw two Vendettas put down, but it was more infantry based with a Leman Russ and a Demolisher and 3 Armoured Sentinels with Plasma Cannon.

So 6 major threats in the Russes, Vendettas and the Veterans.

The Mission was Kill Points Dawn of War.

Again my opponent won the roll and set up his platoon and HQ fairly centrally with the missile team on my right in some woods. After much thinking he decided to bring the Vendettas on normally. I choose deploy nothing but bring everything on first turn.

His first turn basically saw him fully deploy. A vendetta on each flank filled with the melta veterans, his Armoured Sentinels on my right next to the regular Russ and his demolisher on the right.

I brought all my stuff on my left flank lead by the Exterminators, the Demolisher and Eradicator on my right (well middle) with the Hellhounds taking the lead in between with my chimeras behind.

Turn 2 sees him let loose with all his lascannons and nothing happens. His Sentinels shake a Hellhound and the missile team pop a chimera.

In reply I stun lock both Vendettas, Burn a squad with a Hellhound.

Turn 3 sees him bravely move a Vendetta flat out after my Demolisher and the Sentinels and Leman Russ bounce off my Hellhounds. In reply I manage to wreck the fast moving Vendetta and the Demolisher and Eradicator demolish and eradicate the veterans inside. First two threats dealt with. 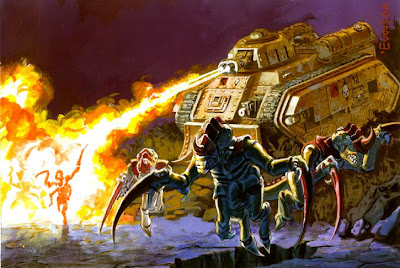 My Exterminators open up and take down the other Vendetta, and then my Hellhounds BBQ the Veterans who came out of that wreck. Threats three and four dealt with.

His Turn 4 sees his Demolisher come into range and scatter away from my Demolisher. Marbo turns up and kills the Infantry who had lost the Chimera in turn 2, and again the Sentinels again bounce of the Hellhounds.

My Demolisher fires back and kills his, the Hellhounds BBQ yet another squad and the Exterminators kill one and shake the other 2 Sentinels. I start to pile forwards with my Chimeras now that the Vendettas had gone. Marbo survives a lot of lasgun fire only to fall over to a single meta gun.

In turn 5 he charges the Sentinels into the Hellhounds and the Leman Russ finally killed one, but the Sentinels literally bounce of the Hellhound this time. In reply my Exterminators get into the soft side of the sentinels and wipe them out as the Hellhound BBQ's another squad of Guardsmen and parks it self in front of the Leman Russ to block it sight. The Eradicator and Demolisher start shooting at the Missile Team killing one and a few men from the command squad behind it.

Turn 6 Sees his Missiles and Leman Russ bounce off my Hellhound. In reply my Manticore fires in Danger Close at the Russ and just missing my Hellhound an rips of the Battle Cannon. The Eradicator and Demolisher finish off the command squad and the missile team and the Hellhound and Chimeras kill his last Squad and Lord Commissar.

This was a game where my opponents dice deserted him completely he pretty much always failed to penetrate by 1, but my deployment and only ever giving him hard targets to shoot at greatly reduced what he could actually hurt and then he needed 5's or 6's on one or two dice.

Again the Hellhounds, Russes, and the Manticore proved to be so effective, but how will they do against Marines or Terminators?

Well you can find out tomorrow as I take on the man of the moment, the internet hate figure, and his batch of Cronies in the form of Draigowing!