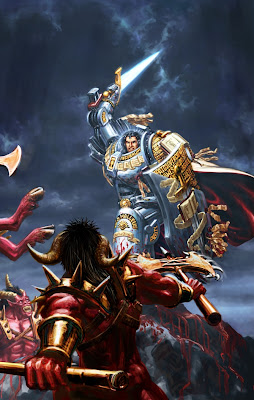 So on to game 3 and my opponent was the very same chap that Grazer from Claws and Fists played in his second game - so time for some pay back for my club mate!

It wasn't quite your typical Draigowing, but it was still a powerhouse of pain:

Now there's no libby but Karamazov stops the issue of mass tank shock vs Draigowing with a Orbital Bombardment relay and a master crafted multi melta, as well as auto passing/failing morale tests.

The mission was 3 objectives going across the board in a diagonal line from top left to bottom right with one in the middle, but each player after turn 1 scored 100vp's for holding each one with a scoring unit. Deployment was pitched battle but each side had the zone extend up to half way and in 12 from the left hand side. This side was only 12 away from the other armies "starting" objective so all where under threat from the word go. Most Vp's from kills and objectives held wins.

On the same table that I had my first game on vs the Battlewagon Orks, my opponent yet again won the roll for deployment (3 out of 3!) he set up with his Paladins and characters in the little part of the deployment zone that stretched out to half way all the way over on my right. He had his Purifiers on his starting objective behind the massive GW landing Pad. The Strike Squad was in reserve. For his Grand Strategy he choose Hammer of the Righteous (re-roll 1's to wound) on all his units so bizarrely putting the Purifiers on his starting objective made no sense.

So with his Death Star of Paladins all the way over on my right flank I set everything up on my left and most of it up near the half way line. I hid my Demolisher and Eradicator behind some BloS terrain in the middle of my zone of it covered "my" objective and the middle one, as well as the way his Paladins would have to come. I also put the Hellhounds in front of these so if he shot the real danger to his army the Demolisher I would at least get a cover save if he got past the Armour 14. The Manticore hid in the left corner and my Chimeras set up behind my Exterminators who where ready to rush the Purifiers.

My Opponent takes his first turn and moves his isolated Paladins back towards the fight now. His Purifiers move so only the Psycannons could see a Chimera between the Exterminators. The Vindicare blows up the Exterminator that had its front armour facing him! The Purifiers shake the chimera.

In my first turn I push the last Exterminator and the horde of Chimeras into the Purifiers faces. The Manticore lets loose with 2 shots and kills a Paladin. The Hellhounds are both just in range of the Vindicare and burn him out with ease!

In the GK turn 2 the Paladins run closer and the Purifiers charge the Exterminator and blow it up, but now they are in range of multiple heavy flamers, plasma veterans and the demo charge....

.... which in my turn 2 is exactly what happens! After plasma gun fire kills 2 or 3 Purifiers the little demo charge toting nutter who has spent 2 games twiddling his thumbs lets loose his bag of fun and drops 7 Purifiers in one go! The Manticore drops another Paladin as I get a few wounds upon the unit. Turn 3 sees the Strike squad still off the table so the Juggernaut of Paladins roars closer and one model is just in charge range of my Hellhounds. The one Paladin rips of the turret and that's his turn. He would of done more damage but by conga lining his unit out to avoid mass pie plate hits he minimized the number of models who could assault.

My turn 3 sees the Special Weapon squad and a infantry squad take "his" starting objective and sit there for the rest of the game. With his Paladins in my flank now I commit everything in this turn. Chimeras move forwards, veterans pile out and masses of ordinance, plasma, and melta is let loose into Draigo and his cronies. The dust settles and the result was somewhat not very impressive, but multiple Paladins are wounded, Draigo is wounded and Karamazov is wounded too.

His turn 4 sees the Strike Squad arrive and cower behind some LosB terrain the Vindicare was in. The Paladins multi charge so they hit the damaged Hellhound, 2 Chimeras and a single Paladin makes it into the Veterans. One Chimera is destroyed and bizarrely only 1 Chimera and 2 Veterans are killed, more annoyingly the Veterans hold in combat on a 4! This seemed bad but it actually worked out for me as only 1 more Paladin could pile in as the Veterans where sat between 2 Chimeras.

In my turn 4 I break off the Demolisher and Eradicator is go after the Strike squad and reduce it down to a single man. In the middle everything that is mobile retreats and sets up a new line after the veterans die, but they live, and escape to fight another day!

Turn 5 sees the Paladins chasing shadows in the form of fast moving Chimeras, but by diverting a few towards the middle objective I force where he goes as I am racking up the VPs from the other objective I hold. The Paladins charge and destroy a Chimera just (again Conga lining limits his assault power).

My turn 5 sees the Veterans rally but only after "Get back in the fight, but it's plasma guns back in the fight. I send more ordinance, melta and flames at the Paladins and at this point Draigo is down 2 wounds (half VPs!) and so is Karamazov, and more importantly the last 6/7 Paladins are all on 1 wound too. I manage to take another wound of both the Characters and drop the Paladins down to 6. I need a turn 6 to see a certain victory.

The Paladins kill the units I sent into the middle but with my last few plasma and melta guns I take down Paladin number 5 - half Vps for his 700 point unit! The game ends and we total up VP's 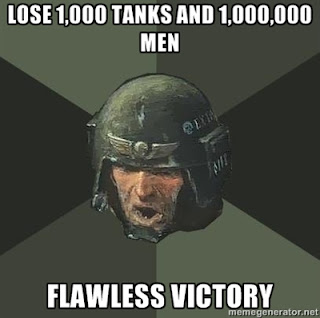 Including the Vps for 1 objective held for 3 turns I come out exactly 600 points in the lead! So a solid victory for me, but not a total bloodbath on paper, but on the table all he had left was 5 wounded Pladins and Draigo on 1 wound, and Karakmazov on 1 wound too.

So 3 wins out of 3! But where does it leave me in the final placings?

Well after a lonngggg wait and a superb raffle I wasn't top 3 so when the placings where handed out I was 4th! Joint 3 on Battle points but I was knocked down to 4th on VPs earned over all 3 games.

I look back at the mission pack and 601 points in my last game was the next point bracket up, and then I remembered that lonely strike squad marine hiding! If I had killed him I would of been over 601 points and taken 3 place! So while on paper it looked like I was 750VP's behind 3rd I was really 1VP away from 3rd, maybe even 2nd!

But despite that I cannot say I'm disappointed, in fact I'm ecstatic! It's the best I've ever done, and ever more so I had 3 great games, against 3 very, very, different armies, including my first game against Draigowing. No Dreadnoughts but that blob of Paladins is a real pain in the ass, but it can be beaten!

So onwards and upwards after my disappointing GT with my Space Wolves. I will take IG to War of the Roses as well as Blog Wars (well maybe I might go crazy for blog wars).